Back To The Future - Vusi Thembekwayo

Get the latest opinions, articles and insights from Vusi straight to your inbox.

Back To The Future 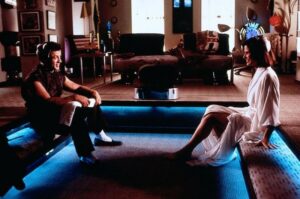 The future is being revised in the archives of movies.

Sitting in the tub, Sylvester Stallone & Sandra Bullock place 2 domes over their heads and close their eyes. And then, contact-less intimacy. Crazy in 1993. Completely possible today.

The study of the future is like studying ocean currents. You know they are there. Will always be there. You are just not altogether sure of how much of their past patterns, trajectories & behavior will repeat in the future. And with climate change in the salad bowl of factors!

Remember in the movie The Matrix, when Neo gets plugged into the motherboard and downloads a program of Jiu-Jitsu? Or when Neo is awakened to the sleep of the Matrix into the real world. This post-COVID period feels a little bit like that “awakening”.

Everything we knew has changed. And what hasn’t changed, is either dead, dying, or in denial.

With governments around the world printing more money than headmasters do report cards at a high school, the meaning & value of money has changed.

Capital markets, now flush with liquidity, have had to find creative ways of deploying this new fresh batch of computer-generated datasets of money. Cash.

So the US government gave a stimulus cheque to its citizens. Hard. Cash. The kind that lands with a thud on the palm of your sweaty hands.

Investment firms saw the opportunity & a hurry of activity into creating SPACs that would house some of the new liquidity & create listed exits for PE & VC firms. Some worked. Most didn’t.

But the ordinary US citizen was probably happy with their stimulus cheque. In the Netherlands, a mate of mine was sending me updates about how responsive their government was in supporting businesses to stay open. I couldn’t tether the miles offside difference between the ingenuity of their governments & the lackluster response of mine.

A year later & not a single bank CEO, fund manager Key Individual or any fiduciary officer has been held accountable for how badly distributed the Loan Guarantee Scheme was. Thousands of businesses suffered a death that was completely avoidable.

But the #Bitcoin maximalists saw this as a moment of reckoning. Those 2009 emails between Hal Finney & Satoshi Nakamoto predicted this moment in history. And the community of believers & early adopters piled into the scrum of the #BTC bull-market.

As they say, TO THE MOON.

Money changed. Money is changing. Make sure you are not left behind in the money revolution.

Intimacy has always had one single universal rule: proximity. You cant be intimate from a distance. Sorry, Bette Midler. (see what I did there?). COVID forced us either into the arms of those we love or those we loathe. China experienced a brief spike with record levels of divorce suits.

But Durex – in my mind amongst the world’s most innovative companies – has been experimenting with distance intimacy for a while now.  They have an amazing product platform that is tech-enabled touch intimacy called Fundawear.

Watch this -> Durex is bringing Fun into the Underwear

Good news for your next long-distance relationship. So now you can experience your partners (or partners – not my place to judge) from a distance.

The news was always about bringing into your world information you didn’t know but needed to. Breaking news was about leading with an important story that the other news outlets didn’t have. Today, if OJ Simpson was being chased down a high-speed motorway, you would be watching that chase live on somebody’s IG feed with the legal merits of being discussed in a subreddit group.

But the truth is that today, the consumers of news & media are more powerful than the producers of news. Newsrooms have a process of collecting, vetting & verifying news & news sources before they publish. They have to. Their license conditions compel them to do so.

So when the news incident happens, they are slower to publish than the instant publishing by the person witnessing the news event. Yesterday a US rockstar urinated on a fan live on stage. You can view some of the videos here US Rockstar pees on fans and luckily New York has blocked out the gruesome parts of the video.

Before the news outlets could run the story, videos of the incident were circulating on social media. The news outlets have simply amplified the story through the distribution channels & deep reach. Suddenly newsrooms are not as important as their distribution & reach.

Africa – in fact, much of the global South – is slower to this trend of the future than the more developed western world. But a trendline is s trendline. And the change is imminent.

In the UAE, Dubai, His Excellency @HHShkMohd had their lead government technology team develop for his administration, a live app that manages the performance of ministers & their ministers by tracking their daily deliverables to their long-term goals. It cascades their long terms goals into daily outcomes.

And then each minister must log their performance on that system. Daily. A rating system is then allocated & ministers who are constantly underperforming and performance managed. Those that perform are rewarded.

So the fact that they built an entire city #DubaiExpo2020 in less than 4years is neither a wonder nor a miracle. Must watch this Dubai Expo 2020 Favorite Pavilions

It’s a managed process of performance. Government is accountable.

These systems will make their way into the systems of governments around the world. The technology will be more ubiquitous & citizens will demand more accountability.

Imagine being able to track the performance of your ward councilor on an app.

The world is changing.

But you already knew that. This is an excerpt from my most recent letter to our partners & investors on the rate of change and its impact on our lives. Are you changing? And are you changing fast enough?

Back to that iconic 1993 flick, Demolition Man. The movie is set in a beautiful nirvana town of Santa Monica where there is all-around government surveillance, no crimes, no profane language & no sex. Children are planned and parents genetically matched.

I think we are a single generation away from this reality.

And the industries of the future will be built by the technologists who are willing to take the bet.

A bet on the future.